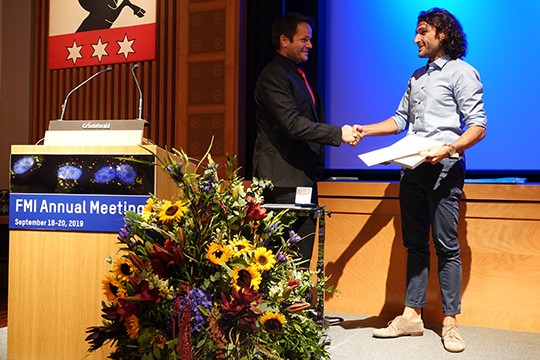 A highlight at the FMI Annual Meeting 2019, which has taken place last week in the Swiss Alps (Grindelwald), was the Award Ceremony: the winners of the Ed Fischer Prize for best thesis, the Max Burger Prize for an outstanding postdoctoral publication, and the Chiquet Originality Prize were called on stage to receive their award and give a short presentation about their project.

Paolo Capelli (Arber group) was awarded the Ed Fisher 2019, which recognizes the best thesis defended in the previous year. This prize is named after Nobel laureate Ed Fisher who was an inaugural member of the FMI Scientific Advisory Board.

Movement is the main output of the nervous system, but how the brain communicates plans for diverse body actions to the spinal cord for execution is poorly understood. Paolo took an innovative tracing approach to identify the neurons that act as direct communication lines for different forms of movement from the brainstem to the spinal cord. He identified an anatomical logic in the organization of these channels for the control of fore- and hindlimbs, and made use of these findings in the main work of his PhD thesis. He was interested to understand how locomotion – an essential form of movement engaging the full body – is regulated by brainstem command centers. Paolo found that a small region in the caudal brainstem named lateral paragigantocellular (LPGi) contains excitatory neurons that are essential for high-speed locomotion in mice. Optogenetic activation of these neurons produced full body locomotion at different speeds, while analogous experiments with intermingled inhibitory neurons resulted in behavioral arrest. Brainstem subpopulations integrate information from many upstream motor centers and together with their specific connectivity matrix to spinal circuits, this likely explains their specific roles in the control of body movement.

Paolo’s studies advance our understanding on key circuits controlling the speed of locomotion and highlight the importance of dissociating neuronal subpopulations in the caudal brainstem accordingly to neurotransmitter identity to uncover functional specificity in behavior.

Alex Tuck (Bühler group) was awarded the Max Burger Prize 2019, which recognizes an outstanding paper by a postdoctoral fellow in the previous year. This prize is named after Max M.Burger who was Director of the FMI for almost 15 years (1987-2001).

Long non-protein-coding RNAs (lncRNAs) were first described about 15 years ago and today we know that lncRNA genes play important roles in development and disease. But there are still many open questions about this special type of RNAs. For example, which ones of the thousands of lncRNA genes are functionally relevant? Do they function as DNA elements or via their RNA products? Determined to find some answers, Alex Tuck conducted a study in which he first identified 16 of the most important lncRNA genes and then analyzed their effects on gene expression – either in cis (involving neighboring genes) or in trans (involving distant, unlinked target genes). The results show that although many lncRNA genes function in trans, up to a third act in cis to modulate the expression of neighboring genes; in that case, the RNA product may not be required, which is supported by the fact that many lncRNAs are quickly degraded in the cell, as Alex could also show. The study highlights the importance of the role of lncRNA genes as DNA elements, besides RNA-dependent functions. With this research, Alex not only identified some emerging principles for the biological function of lncRNAs, he also put together a toolkit that will greatly facilitate any future experimentation with lncRNAs.

Alicia Michael (Thomä group), Ralph Grand and Luke Isbel (both Schübeler group) were awarded the Chiquet Originality Prize 2019, which recognizes scientists who have successfully ‘thought outside the box’, pursuing truly creative research, obtaining results that are unexpected or against commonly accepted dogma, or inventing a new approach, method or tool that changed their field. The award is named after the late Ruth Chiquet-Ehrismann who was a group leader at the FMI 1985-2015) and was successful at pursuing non-mainstream topics that nonetheless had major biomedical impact.

The question to what extent transcription factors (TF) bind DNA when it is embedded in nucleosomes is a fundamental question in genome science, but it is challenging to study, implying a slow and tedious workflow. A team made up by three postdocs – Alicia Michael, Ralph Grand and Luke Isbel – set out to develop an assay that would allow them to test all 145 different nucleosomal positions for a given TF. Combining gene-synthesis and in vitro nucleosome assembly, they produced a library of nucleosomal DNA pieces each carrying a single motif and measured actual binding of a TF to all these variants using next-generation sequencing. The assay – called NETT-Seq (Nucleosome Engagement by Transcription factor Titration Sequencing) – has already been instrumental in solving long-sought after cryo-EM structures and dissecting how TFs bind nucleosomal binding sites on the base-pair level.

In addition to the level of scientific excellence and the insights gained thanks to the new assay, the judging team liked the cross-lab collaboration and the interdisciplinarity of the project: each team member used his or her expertise to overcome considerable challenges, ranging from the NGS library preparation, to data analysis, and biochemical obstacles to prepare entire recombinant nucleosome libraries. They also liked the fact that the three postdocs developed the assay completely on their own initiative and are the only ones who should get credit for this transformative work. 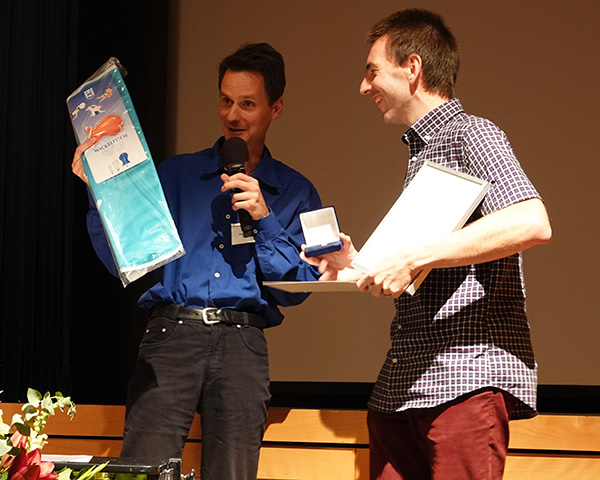 Alex Tuck receiving his prize (and the beloved "FMI Wickelfish" to swim down the Rhine!) from group leader Helge Grosshans. 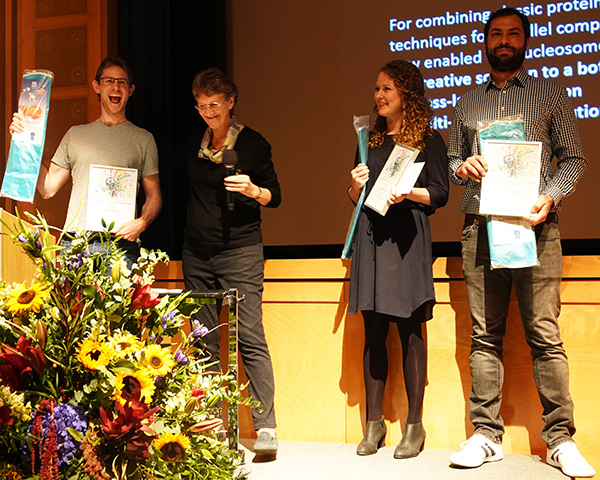