RNA decay plays a fundamental role in gene expression by controlling the quality and quantity of messenger RNAs. However, it has proved difficult to study and is still shrouded in mystery. Scientists from the Bühler group now uncovered key targets, components and functions of mammalian RNA decay pathways, and found that RNA decay is tightly connected to another crucial stage of gene expression: protein synthesis (translation).

RNA decay (or degradation) is a key modulator of gene expression as it counterbalances the rate of transcription by eliminating transcripts when they are no longer needed. In addition, it fulfills a role of quality control, called RNA surveillance, by eliminating RNA molecules that are deemed nonfunctional or aberrant. RNA decay is misregulated in many diseases including cancers and neurological disorders.

RNA decay relies on a set of enzymes, called decay factors, that catalyze the degradation of RNA into smaller components. RNA decay can start at either end of the RNA molecule, using different pathways. In eukaryotic cells, the decay factor XRN1 is involved in cytoplasmic decay in the 5’ to 3’ direction, whereas a complex called the exosome – together with an additional complex called Ski – is involved in 3’ to 5’ decay. The complexity of RNA decay makes it hard to study, therefore fundamental questions remain. For example, do the different pathways target all RNAs or does a specific decay pathway target a specific group of RNA? And, to what extent is cytoplasmic decay coupled to translation?

Alex Tuck and Aneliya Rankova, both postdocs in the Bühler group, were determined to provide answers to these questions, working with mammalian cells and focusing on cytoplasmic decay (some RNA decay also takes place in the nucleus).

They chose a new method for their analysis: instead of removing the decay factor of interest and looking at what happens (an approach linked to many downsides), they used cross-linking to get a snapshot of the direct binding between decay factors and RNA molecules at a specific moment in time. This allowed them to directly profile the targets of the decay factors XRN1 and the Ski complex. Another novel technology that maps all stalled ribosomes (ribosomes that collided into each other and therefore stopped properly translating mRNA) in a cell was also essential for their study. This technique was developed by the group of David Gatfield at the University of Lausanne, which, like the Bühler group, is a member of the NCCR RNA & Disease, and collaborated with the FMI on this project.

The results show that there is extensive specialization: the two decay pathways target different groups of RNAs and have different roles. Most mRNA turnover occurs via the 5’ to 3’ pathway, but some mRNAS – in particular those encoding histones – depend on 3’ to 5’ decay. By comparing their decay data with the map of stalled histones, Tuck and Rankova discovered that the Ski complex is often present where there is a problem in translation, as reflected by stalled ribosomes. They concluded that the 3’to 5’ decay pathway is exclusively involved in surveillance to remove thousands of aberrantly translated mRNAs.

The scientists also identified the role of a protein called AVEN, as Rankova explains: “Not much was known about AVEN except that it’s an RNA-binding protein overexpressed in certain cancers. In our profiling studies we found that the Ski complex binds to AVEN; we wanted to understand how they function together. Our data revealed that AVEN and the Ski complex cooperate to counteract aberrant translation, with AVEN preventing ribosome stalls at obstacles in the RNA, and the Ski complex eliminating transcripts if these events accumulate.” Tuck highlights the key findings and relevance of the study: “In addition to identifying the strong specialization of the pathways, we revealed a surprisingly widespread coupling between RNA decay and translation; many transcripts seem to have problems with protein synthesis and the 3’ to 5’ decay pathway is highly affected by translation. This is particularly the case for histones, the proteins that package DNA. We have identified a universal surveillance program, important for cell division and likely to play a role in certain cancers. It will be interesting to learn more about these compounds, in particular their implication for cancer.” 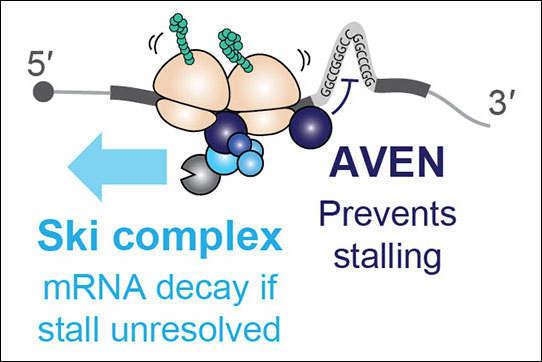 "We have identified a universal surveillance program, important for cell division and likely to play a role in certain cancers."
Alex Tuck