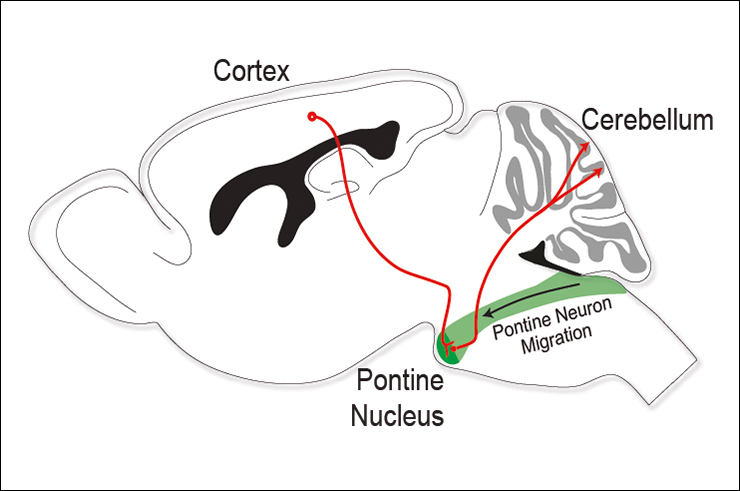 In a comprehensive study, researchers from the Rijli group found that a single Hox transcription factor expressed in a group of neurons of the pontine nucleus - the cerebral cortex most important brainstem relay to the cerebellum - determines the wiring onto these neurons of specific cortical neurons. These findings further our understanding of the molecular logic underlying complex corticocerebellar circuit assembly.

As the foundation for our brain is laid, 100 billion neurons are formed and appropriately connected. Soon after the neurons are born, they begin their migration to their final location in the brain - sometimes very far away from their birthplace - where they start establishing connections with other neurons. Together, these connections create neural circuits along which the information will travel. Coordination among these processes is critical, especially when distant brain structures need to be orderly connected through intermediate structures.

The mammalian corticocerebellar pathway is one such long-distant circuit and it has a fundamental role in sensorimotor coordination and learning. It connects the cortex to a small region in the hindbrain called the pontine nucleus (PN), which is the largest brainstem precerebellar nucleus and is essential for relaying sensory and motor information from the cortex to the cerebellum.

PhD students Upasana Maheshwari and Dominik Kraus from the  Rijli group, as well as colleagues, set out to investigate how the PN circuitry is assembled and which molecular information PN neurons require in the process. In a collaborative effort, the researchers designed experiments that allowed them to study specification and migration of PN neurons in mice at embryonic stages (when the neurons start to be born) and transsynaptically trace their connections until postnatal stages (when the neurons established all their connections and the circuits are fully in place.)

In a previous study, the Rijli lab already highlighted the role of Hox transcription factors – well known for their role in conferring cellular identity in many developmental processes – for specifying the PN neurons from the compartment where they are born to their final position in the PN. In the current study, which has recently been published in Cell Reports, researchers studied the process in more detail and showed that Hoxa5 (the type of Hox transcription factor investigated here) is expressed in a specific subset of PN neurons at the onset of their migration. The authors explained how the process was regulated epigenetically, in particular highlighting the role of retinoic acid signaling. They showed that the neurons expressing Hoxa5 settle posteriorly in the PN.

The researchers then did further experiments to understand the role of Hoxa5-PN neurons in the corticocerebellar pathway. Maheshwari, one of the two first author of the study, explains: “We found that these neurons were preferentially connected with primary somatosensory cortex – and are essential for the relay of limb specific somatosensory information from the cortex to the cerebellum – but were avoiding information coming from the visual cortex. We could show that this was independent of their position in the PN, which speaks for the role of Hoxa5 in instructing specific corticopontine connections.”

“This comprehensive study elucidates how single Hox transcription factors may coordinate neuron specification, migration and orderly settling in the target nucleus, as well as their role in coordinating complex connectivity patterns,” says group leader Filippo Rijli. “Moreover, these findings further our understanding of the molecular logic underlying circuit assembly and diversification in the mammalian corticocerebellar pathway.”

"These findings further our understanding of the molecular logic underlying circuit assembly and diversification in the mammalian corticocerebellar pathway."
Filippo Rijli