The brain’s emotion-processing center — the amygdala — is one of several brain regions involved in social behavior. But the exact role that this almond-shaped structure plays in the so-called ‘social brain’ remains mysterious. Now, the Lüthi group has found that the activity of different populations of neurons in the amygdala reflects whether mice interact with their peers, or whether they focus on self-centered behaviors such as grooming. The findings could help to understand how the activity pattern of groups of neurons sets an overall ‘brain state’, and how that influences behavior — including social interaction and other behaviors that are impaired in neuropsychiatric conditions such as autism and social anxiety.

State of mind
The brain fluctuates between distinct internal states, including hunger, anxiety and aggression, each of which can alter an animal’s behavior. For example, a hungry mouse will move around and look for food, whereas an anxious one will freeze in place or only hesitantly explore the surrounding environment, says study co-senior author and FMI senior group leader Andreas Lüthi. However, Lüthi adds, the networks of neurons that encode different brain states remain unclear.

In 2019, Lüthi’s team found that two large sets of neurons in the mouse amygdala showed opposing patterns of activity when the animals switched between exploring the environment or performing defensive behaviors such as freezing — a finding that hinted at a key role of the amygdala in coordinating brain states.

But the researchers felt there was more to the story. Studies in monkeys have suggested that the amygdala is important for social behavior, and altered amygdala structure or function has been linked to a series of neuropsychiatric conditions that affect social interaction, from autism spectrum disorders to schizophrenia. So, Maria Sol Fustiñana and Yael Bitterman, two postdocs from Lüthi’s group, and their colleagues at the FMI and the Novartis Institutes for BioMedical Research (NIBR) set out to look at neuronal activity in the amygdala when two mice were free to interact in a Plexiglas chamber.

“As experimenters, we took a backseat and let the animals decide when they wanted to engage with another mouse placed in the chamber, for how long and in what manner,” says Bitterman, who is co-senior author on the study.

Ready to mingle
The researchers recorded videos of the mice’s social encounters and developed an algorithm that characterized the animals’ behavior based on their video tracking. Mice rarely showed aggressive behaviors; instead, they sought to make each other’s acquaintance or, in some cases, avoided interacting with the stranger.

To track the activity of nearly one hundred neurons in the amygdala, the researchers used tiny head-mounted microscopes that peered deep into the brains of mice without interfering with the animals’ normal behavior. The team found that one population of neurons was active only when the mice engaged in social behavior — no matter if they peacefully interacted or they tried to avoid the other animal. A second group of brain cells in the amygdala became active when the mice switched to self-grooming or other non-social behaviors.

Similarly, the team found two populations of amygdala neurons that displayed opposing activation when a single mouse put in a Plexiglas chamber switched between grooming and exploring the chamber or an inanimate object. But the neurons becoming activated as the solitary mouse explored the environment were not the same as those active when the animal interacted with another mouse.

When two mice were in the same chamber, their attention was mostly focused on the stranger: although the rodents typically explored their surroundings while not engaging in social interaction, they didn’t wander around the whole chamber. Under these conditions, the researchers observed that amygdala neurons preferentially code for social interaction rather than spatial exploration.

“The top priority is the other animal, probably because it could be a threat or a potential mate,” Lüthi says. He notes that many people think of the amygdala as the brain’s anxiety detector. Instead, he says, “the social engagement signal covers both avoidance and approach.” The study was published in Nature on March 3, 2021.

Figuring out how the amygdala processes such different behaviors was “absolutely rewarding,” says Fustiñana, who is lead author on the study and was part of a joint FMI-Novartis postdoctoral program that fostered interactions between the FMI and Novartis. “This entire project was a great challenge — from establishing a naturalistic behavioral experiment with two freely moving mice to imaging a deep brain structure and doing the required computational analyses,” she says. “This wouldn’t have been possible without a concerted team effort.”

Next, the researchers plan to look at how internal state signals are broadcast across the brain, and whether manipulating amygdala neurons encoding brain states could lead to changes in behavior.

Because psychiatric disorders are accompanied by altered brain states, Lüthi says, understanding how the brain switches between states might help to figure out what goes awry in those disorders and identify potential strategies to alleviate dysfunctional behaviors. 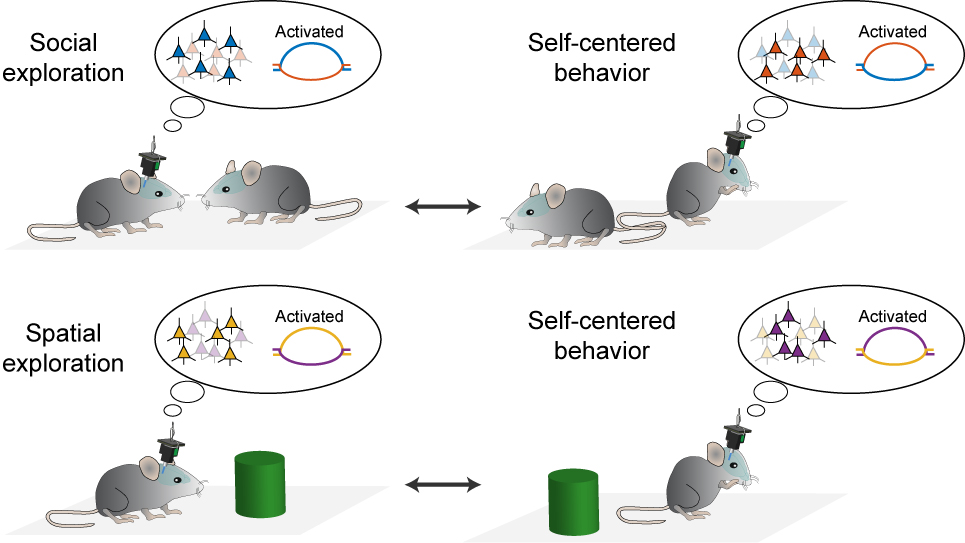 Different populations of amygdala neurons display opposing activation patterns when mice switch between interacting with their peers or exploring their surroundings and self-centered behaviors such as grooming. 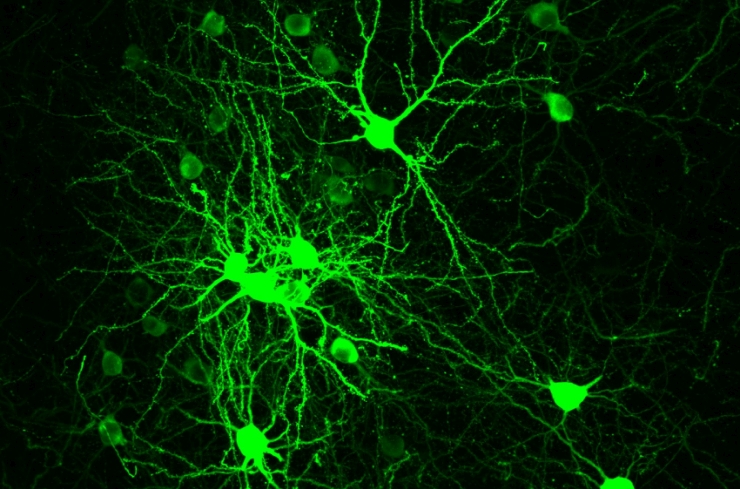 Maria Sol Fustiñana was born in Argentina and did a PhD in biology at the University of Buenos Aires. In 2013, Sol joined the FMI with a Novartis Presidential postdoctoral fellowship. In Lüthi’s group, she uses deep-brain imaging techniques in mice to study how distinct neuronal populations in the amygdala encode behaviors such as social engagement and spatial exploration. In 2021, Sol received a Career Development Award from the Synapsis Foundation, which will allow her to establish her own research direction: addressing the interplay between circuit and molecular mechanisms in memory plasticity in the healthy and diseased brain. When she’s not busy in the lab or applying for group leader positions, Sol dances flamenco.