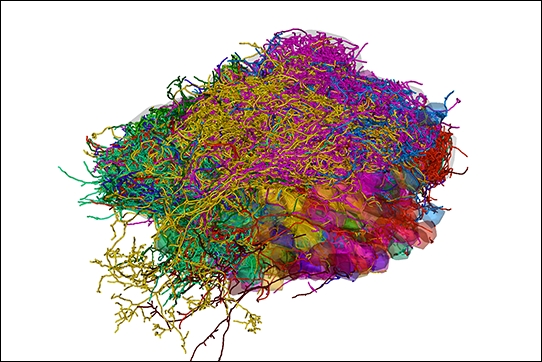 Reconstruction of interneurons that mediate a complex computation

Reconstructing structure and function of a neuronal circuit

The function of neuronal circuits is thought to be determined largely by specific connections between neurons. But this assumption has been difficult to test because the reconstruction of the synaptic connectivity of a neuronal circuit - its "wiring diagram" - is a major challenge. Researchers from the Friedrich lab now recorded neuronal activity throughout the olfactory bulb of a zebrafish larva and subsequently reconstructed all neurons and their synaptic connections. The wiring diagram obtained was necessary and sufficient to explain a complex neuronal computation called "whitening". These results uncover a fundamental mechanism of information processing in the brain and show how information can be written into the connectivity of neural circuits.

Higher brain functions depend on the complex processing of information by neuronal circuits. To what extent the computational functions of such circuits are a consequence of the specific connectivity between neurons remains a big question in neuroscience. In order to answer that question, a wiring diagram - a map of connections between all neurons - is needed. However, building such a wiring diagram for a whole circuit is extremely difficult because it is necessary to image brain tissue at nanometer resolution throughout large volumes. Moreover, the dense reconstruction of all neurons and their synapses in those volumes is a major challenge.

Researchers from the Friedrich group have been intrigued by that question for a while. As reported in a 2016 study, they managed to reconstruct the entire olfactory bulb of a zebra fish larva (read more). In a study that has just been published in Nature Neuroscience, they now made further progress and directly related the structure of a complex neuronal circuit to its function.

Adrian Wanner, who used to be a PhD student in the Friedrich group, led the study. In a first step, he used multiphoton calcium imaging to measure the activity of many neurons in the olfactory bulb of a zebrafish larva in response to different odors. In a second step, Wanner used large-scale 3D electron microscopy (EM) to obtain stacks of EM images from the very same tissue. The quality of the images allowed him to reconstruct virtually all the neurons and synapses in the olfactory bulb. "It’s the first time that we get the complete wiring diagram of an entire brain area in a vertebrate. This enables analyses that have not been possible before," says Rainer Friedrich.

"Whitening" explained
Wanner then merged the two datasets: the optical image data from the activity measurements and the EM image stack. This allowed him to visualize how each neuron is connected to any other neuron, and to determine whether these connections are related to the odor selectivity of neurons. This analysis revealed specific, non-random, connectivity between certain ensembles of neurons. These neurons are coding for features of odors that are represented by strong activity and complicate the precise identification of odors. For example, they may represent functional chemical groups that are common to a set of odor molecules, which makes it hard to distinguish one odor from another. Moreover, excitatory neurons of the same ensemble were found to make many bidirectional connections with the same inhibitory interneurons. As a consequence, excitatory neurons strongly inhibit each other, which suppresses the representations of the feature that complicates odor discrimination. This process results in a computation referred to as 'whitening' – a fundamental transformation in signal processing that is widely used throughout the brain, as well as by radio engineers for example, to facilitate pattern discrimination. Because this transformation depends on specific connectivity among functional ensembles of neurons, the underlying mechanism remained elusive prior to the reconstruction of the wiring diagram.

"This study shows that information stored in the wiring diagram – therefore in the connections between the neurons – is essential to explain complex computations," says Friedrich. The group leader also comments on the long-term relevance of the study: "The results show the power of a 'functional connectomics' approach that combines large-scale neuronal activity measurements with reconstructions of connectivity. In the future, such an approach may, for example, decipher memories. Most theories assume that memories are stored in the specific patterns of connections between neurons. If these theories are correct, it should one day become possible to read memories out of wiring diagrams."

Reconstruction of interneurons that mediate a complex computation

“It’s the first time that we get the complete wiring diagram of an entire brain area in a vertebrate. This enables analyses that have not been possible before.” Rainer Friedrich