The cytosolic iron sulfur assembly (CIA) pathway is required for the insertion of Fe-S clusters into proteins, including many DNA replication and repair factors. Despite its essential cellular function, this pathway remains enigmatic. A new integrative structural and biochemical study from the Thomä group now provides detailed insights into the mechanisms of Fe-S protein biogenesis.

Iron-sulfur (Fe-S) clusters are small inorganic protein cofactors, which are important for protein stability and functionality. The most well known examples of Fe-S proteins are found in the respiratory chain of mitochondria. Fe-S clusters are also present in proteins involved in DNA replication and repair, and mutations in the Fe-S domains of DNA repair proteins are associated with hereditary disorders such as Trichothiodystrophy and Fanconi Anemia.

The biogenesis of cytosolic and nuclear Fe-S proteins depends on a complex pathway known as the cytosolic iron sulfur assembly (CIA) pathway. This pathway is required for the initial assembly of the Fe-S clusters and for the transfer of the Fe-S clusters into client proteins. Despite its essential cellular function, this pathway is not well understood; in particular, the molecular mechanisms of client protein recognition and Fe-S cluster transfer remain unknown. Indeed, Fe-S proteins do not contain any shared sequence or structural motifs, which would represent an obvious recognition element for the Fe-S biogenesis machinery.

A new study led by Susanne Kassube, postdoc in the Thomä group, now sheds light on the mechanism of Fe-S protein biogenesis. Thanks to an integrative structural and biochemical approach, Kassube uncovered the molecular architecture of the cytosolic Fe-S biogenesis machinery (CIA targeting complex, or CTC) at atomic resolution using X-ray crystallography, and visualized its interactions with two different client proteins using cryo-EM.

“Our structural and functional studies of the CTC visualize a major component of the CIA machinery and reveal a critical role of conformational dynamics of its largest subunit for client protein recognition, and potentially also Fe-S cluster transfer,” says Kassube. “Further research is needed to uncover the precise roles of the Fe-S clusters in DNA replication and repair, but we have made a big step towards understanding the cellular pathway that is crucial for their biogenesis.” 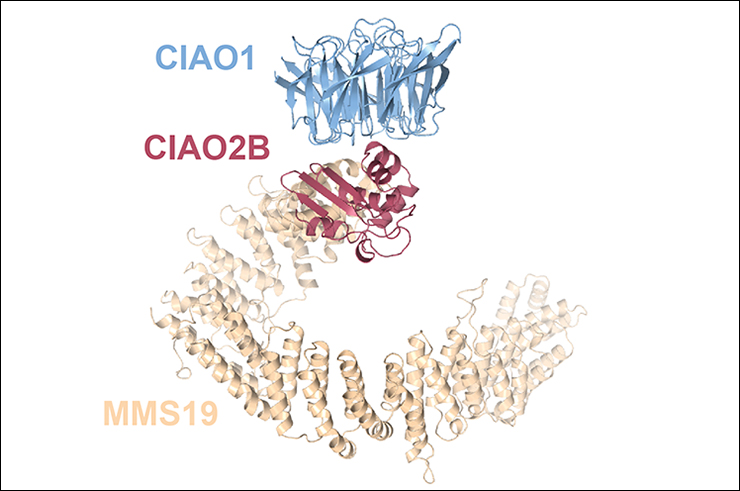