In remembrance of Max Burger

It is with great sadness that we learned that Max M. Burger, former Director of the FMI (1987-2000), passed away on November 2, at the age of 86. Max Burger had a decisive and lasting influence on the FMI – under his leadership our institute grew substantially, and achieved worldwide recognition for its scientific excellence.

Born in Zürich, Switzerland, in 1933, Max Burger studied medicine at the University of Zurich. After practicing medicine for a few years, he focused on basic research and graduated in biochemistry at Washington University in Saint-Louis, USA, in 1964. After establishing his own laboratory on cell surface molecules and cancer research at Princeton University, Max Burger returned to Switzerland in 1972, as a Professor of Biochemistry at the newly founded Biozentrum of the University of Basel. During his time at the Biozentrum, he served as Chairman for five years. In 1987, Max Burger became the Director of the Friedrich Miescher Institute, a position he held until his official retirement in 2000.

Max Burger was a member and chair of numerous scientific boards and prize committees. In particular, he was the President of the Division of Biology and Medicine at the Swiss National Science Foundation, and a member of the Board of Directors at Ciba-Geigy. He was also the Chairman of the Novartis Science Board, which he founded. Among many prizes and honors, Max Burger was awarded the Selman A. Waksman Medal (1970), the Otto Naegeli Prize (1975) and the Order of the Federal Republic of Germany (Bundesverdienstkreuz, 2005).

During his tenure as FMI Director, he stimulated creativity at the FMI by encouraging individual initiative while at the same time establishing an atmosphere of collegiality and mutual trust in which innovation was nourished by open exchanges and collaborations between FMI research groups. Aided by the Scientific Advisory Board, which he valued highly for its critical yet constructive advice, Max Burger identified areas of research to be developed, which he achieved by recruiting young scientists and enabling them to pursue their research.

It was Max Burger’s personal dream – and the vision of the FMI founders – to promote the integration of FMI within the regional as well as global academic landscape: Under his leadership, the number of students at the FMI from all over the world nearly doubled, and he opened the way for FMI group leaders to teach at the University of Basel. In addition, interactions with Novartis, the main sponsor of FMI, flourished. He firmly anchored the FMI at the intersection between basic research and application.

During his 13 years as FMI director, Max Burger continued to be a highly successful research group leader. The Burger lab focused on the molecular basis of cancer, in particular glycoproteins and cell-cell interactions, and viral transformation.

We owe Max Burger a huge debt of gratitude for everything he achieved for the FMI, but also for science in Basel, Switzerland and worldwide.

The FMI remembers Max as an outstanding scientist and visionary leader, but also as a friend who cared about the well-being of every member of the institute.

Our thoughts are with his family.

The memorial service will take place on November 27 at 11 am in the Pauluskirche in Basel. 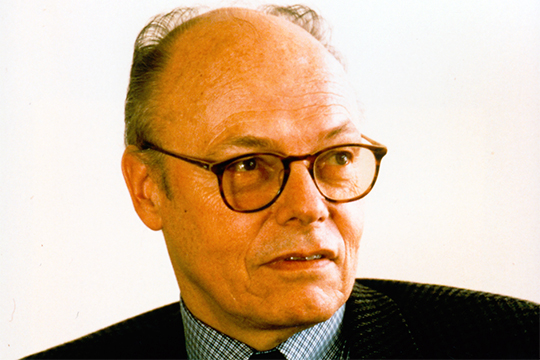