Protecting the genome from transposon activation

Transposons are foreign DNA elements capable of random insertion into the genome, an event that can be very dangerous for a cell. Their activity must be silenced to maintain genomic integrity, which is primarily achieved by H3K9me3-mediated repression. Researchers from the Gasser group identified two parallel pathways that are essential for H3K9me3- mediated transcriptional repression and thus for protecting the genome from toxic transposon activation.

While our genome is the blueprint for every cell in our body, it is also a patchwork of our own DNA and foreign DNA elements that have been integrated over time. These non-self DNA elements are called transposons and are typically ancient integrations of viruses that once infected our cells. For an organism, it is vital to suppress the activity of these transposons, as they have the ability to induce their own amplification and reintegrate as novel copies into the genome, potentially disrupting the sequence of important genes. Consistently, transposon activation has been linked to sterility and cancer.

The cell has evolved several pathways that suppress transposon activity. One of the most important pathways prevents their transcription by packaging them into densely compacted heterochromatin. These silenced regions of the genome are characterized by the methylation of histone H3 on lysine 9 (H3K9me), a mark catalyzed by histone methyltransferases (HMT). Several other silencing pathways are known to act on transposons, most notably the methylation of DNA itself in vertebrates and through small RNAs that are bound by so-called Argonaute proteins.

Using C. elegans as a model organism, researchers from the group of Susan Gasser identified the pathways used by the cell to recruit HMTs to their target sites, either for the establishment of heterochromatin (for example when new transposons are inserted in the genome) or for its maintenance. In their latest paper, they show that an HMT called SET-25 is specifically recruited to and silences the “younger” or more intact transposon copies.

Importantly, the researchers found that there are two parallel pathways that recruit SET-25 to these transposons: On one hand, at existing sites of H3K9 methylation created by another HMT called MET-2, the H3K9me reader protein LIN-61 recruits SET-25. On the other, the somatic Argonaute NRDE-3 and small RNAs derived from transposon sequences provide a means to ensure SET-25 recruitment and transposon silencing de novo, where no pre-existing modification is found. Together these pathways are essential to prevent the amplification of transposons and to ensure the proper development of the organism. Their combined loss leads to significant death during embryonic development.

This study made the cover of the Genes & development issue of January 1, 2021, see here 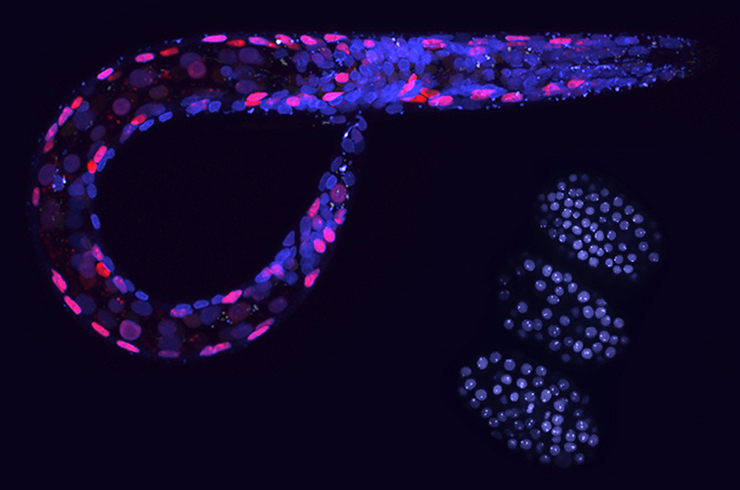 Jan Padeken was born in Berlin, Germany. After completing his master’s and PhD at the Max Planck Institute for Immunobiology and Epigenetics, he joined the FMI in 2014 in the group of Susan Gasser. Jan is fascinated by the role of histone tail modifications in the control of DNA stability and of gene expression patterns during development. His main hobbies are hiking and photography.