During development, scores of molecular signals prod cells to take on specialized identities and functions. In response to some of these signals, the cellular machinery awakens specific genes called ‘immediate early genes’ within minutes. The Rijli group has now identified a unique molecular signature that keeps immediate early genes quiet yet poised for rapid activation. Working out how immediate early genes are expressed at the right level in response to appropriate signals has important implications for our understanding of development, establishment of cell identity, and other key processes such as learning and memory formation in the brain.

Chemical profile
Immediate early genes are expressed during development in several types of cells in response to growth factors and other signals. These genes often encode proteins called transcription factors that activate other genes. In the brain of newborns, immediate early genes are the first to be expressed in neurons that become active in response to touch. But how these genes are kept idle before the brain receives sensory information is unclear, says senior investigator Filippo Rijli.

To address this question, Taro Kitazawa from the Rijli group, Dania Machlab from the Rijli group and the Computational Biology platform, and their colleagues analyzed chromatin — the DNA-protein complex — in developing somatosensory neurons of the mouse brainstem. This brain region is the first to receive and process information from the animal’s whiskers.

Before the mice were born, immediate early genes in somatosensory neurons had a unique pattern of chemical tags on histone H3 proteins, around which the DNA is wound. In DNA regulatory regions known as promoters, histones H3 carried a chemical modification that boosts gene expression. But the genes were barely, if at all, expressed. That’s because histones H3 in gene body regions, which encode proteins, carried a chemical tag that turns off gene expression, the team found.

Because these repressive tags are typically added by groups of molecules known as Polycomb proteins, the researchers called this newly identified chemical blueprint a Polycomb ‘bipartite’ signature. This signature is different from the conventional Polycomb ‘bivalent’ signature, where histones carrying repressive tags are present in both gene bodies and promoter regions, which also carry active marks.

Speedy activation
Next, the researchers performed a genome-wide analysis to identify bivalent and bipartite signatures in mouse embryonic stem cells and developing tissues such as brain, heart, liver and neural crest — a group of cells that give rise to several other tissues including bone and smooth muscle. This analysis revealed that about 1,500 to 3,000 genes displayed a bivalent signature, whereas around 100 to 250 genes showed a bipartite signature, depending on the tissue and the developmental stage.

Further experiments suggested that, during embryonic development, some bivalent genes become bipartite genes. During this process, the promoter regions of bivalent genes become fully active, but the Polycomb repressive marks are not removed from the gene bodies, where they inhibit the production of complete mRNA molecules that carry messenger information from the DNA.

In addition to regulating the production of mRNA molecules, the bipartite signature enables immediate early genes to be induced within minutes in response to a relevant stimulus. The researchers found that a strong molecular signal could remove the Polycomb repressive marks quickly from the gene body, allowing the expression of the gene at the appropriate levels. The study was published in Nature Genetics on February 18, 2021. 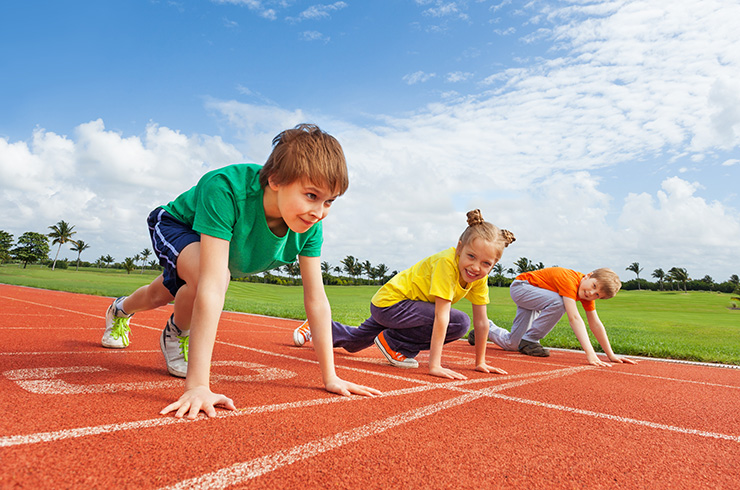 During development, a pattern of chemical tags keeps specific genes quiet yet poised for action — like runners at the starting line.

Taro Kitazawa was born in Japan and obtained a PhD in medicine from the University of Tokyo. In 2015, Taro joined the FMI as postdoc in the Rijli group to work on fundamental questions in neurodevelopmental biology using state-of-the-art approaches. After completing his postdoc, Taro would like to launch his own research lab. He lives in Basel with his wife and six-year-old daughter. In his spare time, Taro likes to run, read novels and science articles, do puzzles and craft projects with his daughter, and play the city-building video game SimCity.

Dania Machlab grew up between Germany and Lebanon, and obtained a Master’s in Computational Biology and Bioinformatics at ETH Zürich and the University of Zürich. In 2016, Dania started her PhD at the FMI, where she is co-supervised by Filippo Rijli and Michael Stadler. The FMI collaborative atmosphere and the ability to work in two groups, Dania says, have been “very enriching on many fronts.” When she’s not in the lab analyzing DNA and RNA sequencing data, Dania likes to dance tango, cook or go for a hike on the Swiss mountains.