The protection of genome integrity of germ cells is essential for animal fertility. Researchers from the Grosshans group characterized a defense mechanism against selfish genetic elements in the C. elegans germline. They identified a protein processing mechanism that controls the activity of small RNAs to achieve specific silencing of transposons while sparing endogenous genes.

So-called “selfish genetic elements” such as transposons are foreign DNA elements – typically from viral origin – that have been integrated in our genomes during evolution. These are a threat to genome integrity since they have the ability to move around the genome, causing DNA damage and potentially disrupting the function of important genes. Germ cells are particularly vulnerable so that failure to silence selfish elements causes animal sterility.

Animals employ several mechanisms to protect themselves against the activity of selfish elements. We recently reported about a study from the Gasser group that highlights such a mechanism using heterochromatin. Researchers from the group of Helge Grosshans at the FMI focus on a different mechanism, which employs small RNAs to silence transposons in the C. elegans germline. This pathway relies on a group of proteins collectively known as Argonautes that repress RNA transcripts that they bind. Binding specificity is provided by small ‘guide’ RNAs that direct Argonautes to their appropriate targets.

However, a cell produces thousands of small guide RNAs, many of which recognize endogenous genes instead of selfish genetic elements. Similar to the way that our immune system needs to tolerate ‘self’ to achieve protective immunity against pathogens without dangerous auto-immunity, Argonautes require mechanisms that direct them specifically only to transposons while sparing genes.

In a study published in Molecular Cell, the Grosshans group discovered how Argonautes distinguish self from non-self. The researchers found that a protease called DPF-3 plays an essential role: it processes Argonaute proteins in a way that they bind only the correct set of small RNAs to silence transposons and DNA repeats but not genes. Without processing by DPF-3, Argonautes bind a different set of small RNAs, causing transposon activation, DNA damage and sterility.

“We discovered that DPF-3 is essential for C. elegans fertility, in male and female germlines,” says Rajani Gudipati, the study’s first author. “It is very surprising that the small RNAs are regulated through the processing of the proteins that bind them. A protease controlling small RNA activity – these are really two worlds colliding!” What is more, the protease family to which DPF-3 belongs, DPP-IV-type N-terminal dipeptidases, was previously only known for their ‘destructive’ role, initiating protein degradation and elimination. Gudipati explains: “Our data show that these proteases can also promote specific functions of the proteins that they chew on. DPP-IV proteins are biomedically very important, for instance as a target in the treatment of type II diabetes, and these findings help us to better understand and exploit their physiological functions.” 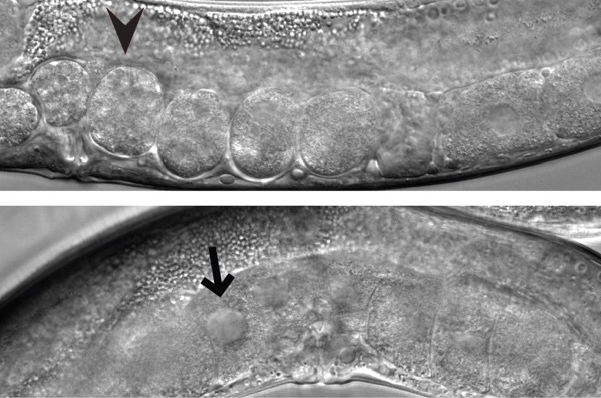 Rajani Gudipatti was born in Cherlopalli, a small village in Andhra Pradesh, India. He completed his master’s in Sydney, Australia and his PhD at Centre de Génétique Moléculaire, Gif Sur Yvette, France. He joined the Grosshans group as a postdoc in 2014. Rajani wants to understand the role of proteases in genome maintenance and, in the long term, explore the possibility of using inhibitors of specific proteases (particularly the DPPIV family) to specifically kill cancer cells. He is married, with a young son, and enjoys hiking.