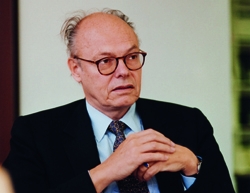 Obituary Max Burger (1933-2019)
It is with great sadness that we learned that Max M. Burger, former Director of the FMI from 1987 until 2000, passed away on November 2, at the age of 86. Max Burger had a decisive and lasting influence on the FMI – under his leadership our institute grew substantially, and achieved worldwide recognition for its scientific excellence.
» Read more

In 1987, Max Burger arrived at the FMI as the new Director. At that time, he was a Full Professor at the Biozentrum of the University of Basel and a new member of the Board of Directors of Ciba-Geigy. Not only his research reputation and teaching experience but also his activities as chairman of the division of biology and medicine of the Swiss National Science Foundation and membership of many other international granting agencies made him the perfect choice for the FMI. His evaluation of the prevailing situation in the Institute and its potential to contribute to science as a whole and to the industrial sponsors in particular proved to be shrewd and effective. Max avoided drastic restructuring and a hectic hiring policy. Aided by the Scientific Advisory Board, which he valued highly for its critical yet constructive advice, he calmly identified areas of expertise to be encouraged. The appointment of a series of junior group leaders was used to fill gaps and build bridges.

Believing it essential for the future of the FMI that group leaders get involved in university science education in the region, Max used his connections to academic life in the city, especially the Biocenter, to open the way for FMI-led courses and lecture series at the University of Basel. The pay-off was an increasing number of excellent graduates and postgraduates choosing to study further at the Institute. This continuing transfusion of youth into FMI labs remained an infinite source of energy, new ideas and technical innovation. This was not only his personal dream but also the intention of the founders of the FMI.

His many connections to Ciba-Geigy enabled him to work wonders with the budget, even in times of depression in the company. In 1994, this relationship also allowed him to grasp a once-in-a-lifetime opportunity to do something for the physical well-being of FMI members. The Institute was able to move into a specially refurbished building (WRO-1066) that provided not only more space and additional facilities but also direct access from the street, which not only enhanced the physical identity of the FMI but was also more convenient for the many University students and other visitors to FMI lectures.

The impressive research results of that time reflect the great influence that Max Burger had on project development, supporting technologies, motivation and cross-collaboration. In addition, interactions with Novartis flourished at several levels more than ever before. Under his leadership, the FMI, from 1997 to 2000 as part of the Novartis Research Foundation, achieved world-wide recognition for scientific excellence.

Excerpt from: FMI 40 Years On, A brief history of the Friedrich Miescher Institute for Biomedical Research by Patrick J. King.