A key regulator for humoral immunity and B lymphoma

The generation of antibodies in B-cells takes place in a dynamic structure that forms during infections, the germinal center (GC). The formation of GCs lays at the heart of the immune response; this process is highly regulated and not fully understood yet. The Matthias group now provides novel insights into the regulation of GC formation and GC-derived B cell lymphomas, highlighting one particular transcriptional coactivator as the master regulator of the GC reaction and a possible therapeutic target for lymphoma.

The humoral immune response is a multi-step dynamic process that is initiated in response to invading pathogens such as viruses or bacteria. The clearance of blood-borne pathogens critically depends on antibodies that play key roles in leading to their destruction and stimulating additional steps of the response. Upon encountering antigens, high-affinity antibodies are generated in specialized structures, the germinal centers (GCs), which transiently form in the peripheral lymphoid organs such as the spleen or the lymph nodes. Within the GCs, B cells – which migrated there from the bone marrow – interact with T cells and dendritic cells and proliferate at a rate that is unparalleled in other mammalian tissues. During this step, GC B cells increase the affinities of their antibodies by so-called somatic hypermutation, a localized mutation of the DNA encoding the antibodies. After several rounds of mutation, proliferation, and selection, the GC B cells exit the GC transcriptional program and differentiate further to become either plasma cells that will secrete the selected antibodies, or memory B cells that will circulate in the body and sustain the protection for months or even years. The GC reaction lasts several days and is under close control by transcriptional cascades and cytokines signaling. Because GC B cells are extremely proliferative and intrinsically mutagenic, they are the origin of many of the most prevalent and aggressive B cell lymphomas (blood cancers in the lymph nodes).

Because GCs are so crucial for the normal humoral immune response and lymphoma development, their regulation is intensively studied. Several essential regulators have been identified: transcription factors such as BCL6, OBF1, and FOXO1 are critical for GC formation and maintenance, while IRF4 and BLIMP1 are required for terminating the GC reaction and initiating plasma cell differentiation. However, the detailed mechanism and functional hierarchy underlying the regulatory roles of these factors are largely unclear.

PhD student Shuang Song from the Matthias group wanted to learn more about the role of these transcription factors in shaping the GC transcriptional program. In particular, he was interested in understanding OCT1 and OCT2, transcription factors known for regulating B-cell specific genes, and OBF1, an essential gene for the majority of GC-derived lymphomas. OBF1 is a cofactor that binds to DNA through interaction with OCT1 or OCT2 – its only known interaction partners.

The researchers generated high-quality genome-wide binding data for OCT factors and OBF1 in mice and human primary GC B cells, as well as in human B cell lymphoma lines. They demonstrated that OCT factors and OBF1 highly colocalize at a genome-wide scale and activate the majority of genes important for GCs. In particular, they could show that OBF1 is upstream of BCL6 and IRF4, two mutually repressive master regulators that have widely been considered to be orchestrating the GC reaction and plasma cell differentiation, respectively. Besides, they found that BCL6 is only functional when OBF1 is also present, with the latter repressing the expression of IRF4, thereby maintaining the GC reaction.

Furthermore, the researchers showed that OBF1 depletion in lymphoma cells leads to blocked proliferation and dramatic disruption of the GC transcriptional program. In brief, OBF1 functions as a molecular switch between GC maintenance and GC exit: once OBF1 expression is stopped, the GC program collapses while plasma cell differentiation initiates. Moreover, they found that OBF1 can serve as a valuable clinical indicator for lymphoma severity classification and represents a novel therapeutic target for lymphoma treatment.

“Our paper provides novel insights into the regulatory roles of OBF1 in the GC reaction and B cell lymphomas, as well as into the functional hierarchy between OBF1 and other master regulators,” says first author Song. The findings also demonstrate that OBF1 is a highly relevant candidate for the pharmaceutical industry, as group leader Matthias explains: “Since OBF1 is essential for mature B cell function and B cell lymphomas proliferation, and its expression is largely restricted to B cells, it emerges as a potent therapeutic target for clinical treatment of lymphoma with presumably only minor side effects.” In particular, the development of molecular-glue-type degraders, engineered proteins, and siRNAs, specifically targeting OBF1, may in the future usher new cures and hope for patients diagnosed with B cell lymphoma. 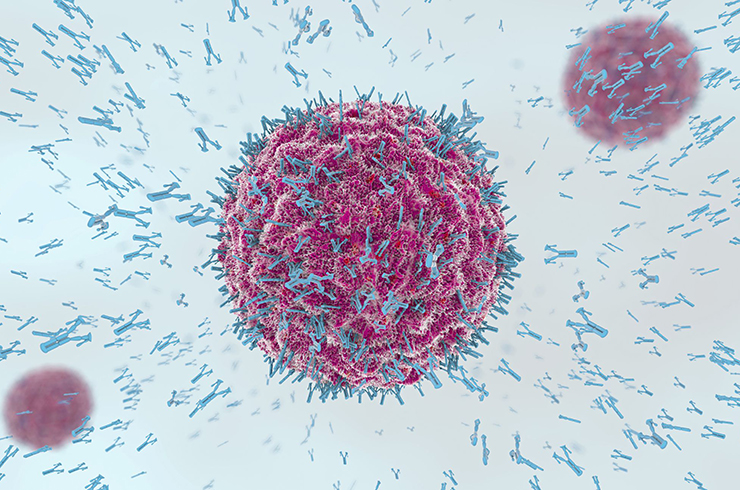 Shuang Song was born in Jingjiang, China. He joined the Master’s-PhD continuous program in biomedical engineering at Tsinghua University. He left the program to join the FMI as a PhD student in the Matthias group, studying the transcriptional regulation of late B cell development and function. After graduation, he plans to join his wife in Australia and attend medical school there, pursuing a career in medicine and research. Shuang’s hobbies include reading, swimming and astrophotography.

“Since OBF1 is essential for mature B cell function and B cell lymphomas proliferation, and its expression is largely restricted to B cells, it emerges as a potent therapeutic target for clinical treatment of lymphoma with presumably only minor side effects.”
Patrick Matthias